A Change In Course?

Typically, I use these papers as an opportunity to bash materialism or blind faith in human might and entrepreneurial ability, and I usually do so to promote the tenants of a continuous, traditional society (in much the same fashion as one G.K. Chesterton did in his newspaper columns). Today, the agenda is different. Poverty Inc. spectacularly showcases the subversion of an altruistic impulse brought about by traditional society that is marvelously exploited in the collapse of religious society by governments, NGOs, and bureaucrats. To be more blunt, the events shown in Poverty Inc. are a direct result of malicious actors exploiting an impulse that is only exploitable because that continuous, traditional society has been abandoned. Even simpler, the entrepreneurs are in the right. 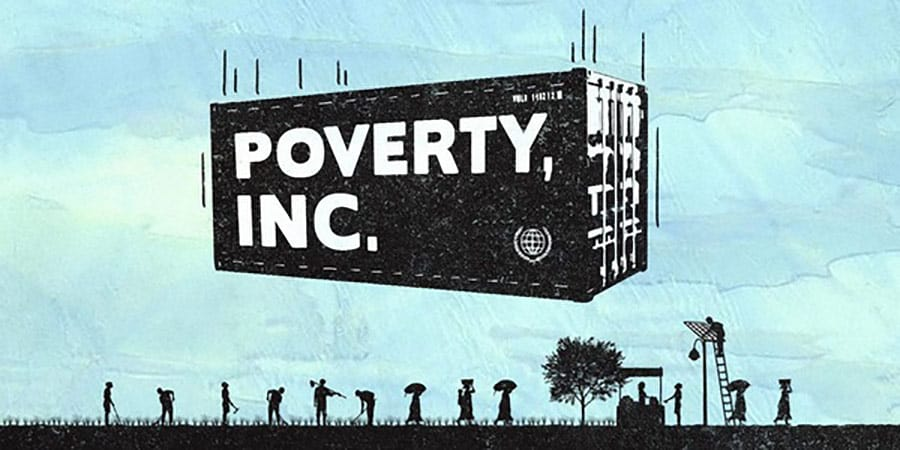 The Proper Way To Assist

Once upon a time, the proper way to assist someone or a group of people in times of crisis was to first do what we are all familiar with, and just provide what is needed to survive, whether the need is water, food, or shelter. After the period of initial shock, the person receiving assistance was then expected to either be recovered or to enter some sort of employment, typically under the person giving the aid to the receiver. This predated modern concepts like minimum wage and workplace regulations, so this relationship often took the form of master-servant.

The Wrong Way To Assist

In the modern era, we have completely axed the "provide work" provision for assisting those in need. Instead, the political reality and vile exploitation by agents of the state has redefined "assistance" to simply mean "endless 'free' welfare". The West is expected, either through private or state means, to pour endless amounts of money and material into areas that are hit by natural disasters or that have not been lifted out of poverty. As stated in the film, this creates an industry around facilitating the transfer of this wealth, which then creates an industry of collecting this wealth under the guise of charity. The money or material that simply gets handed to these people "outcompetes" domestic industry and entrepreneurship, keeping the people unemployed and in a nearly permanent state of recovery. The method is also deeply insidious. Christian society, and now post-Christian society, has a deep want to provide help for people as easily as possible. We wouldn't want to expend effort in doing our good deeds, now would we? Simply sending money to an NGO or the government is much easier and provides the same dopamine boost!

With this, the system is complete, and the Foreign Aid complex that we all know isn't just operational, but reinforcing and constantly expanding.

As usual, the modern "solution" also suppresses that which would actually help people. The film points out the work ethic and employment in these areas that should rightfully exist if stifling Western "aid" wasn't constantly arriving, like shoe industries, chicken farms, and local crafts. Much more ambitious industries would exist on top of these, though I doubt the film had time to elaborate.

What Does This Practically Mean?

This division of labor, commerce, and productivity that we would see in the natural state of things is the key to civilization. It is brought about and maintained by entrepreneurs. These entrepreneurs are being artificially suppressed under the full force of Western altruism and government. The people are left in stunted half-civilizations.